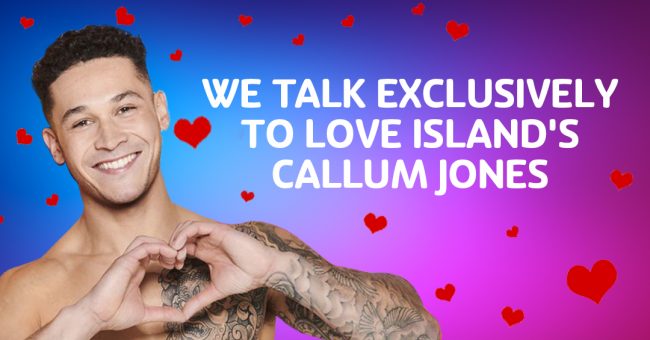 PlayOJO talks exclusively to Love Island heart throb, Callum Jones for his views on the current show, the pressures of being a contestant in Love Island as well as issues of fairness about whether the show is lacking diversity. Read on for juicy inside goss!

So Callum, you were one of the most talked about Love Islanders of Season 6. Tell us what it was like being on the show?

I genuinely feel like it was one of the best times of my life, it was a great experience. Being away for 5 and a half weeks in a nice sunny country, enjoying my time. It was brilliant, what isn’t there to love?

What did it feel like to leave the show on day 38?

It felt like it was my time to go, I was in there for 5 weeks and found what I was looking for. I was so grateful that I even made it that far!

Your body was and is in great shape, you look like you work out a lot! Did you feel you had to step your exercise regime for the show or are you just generally into your fitness?

No not at all. I’m really into my fitness, fitness is always something I’ve been into, even before I went into the villa. I was actually in better shape before I went in, so it wasn’t like I had to have an extra kick up the bum to get into shape when I knew I was going in. I went to the gym regularly but not due to Love Island, it was just part of my lifestyle. 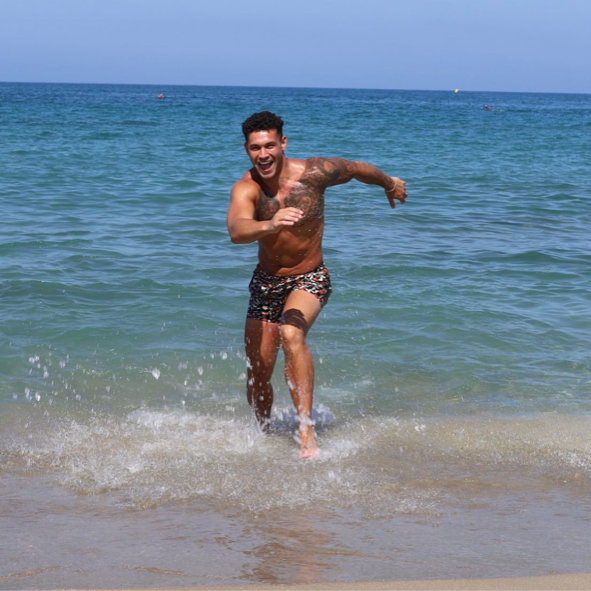 It must have been so surreal being in the villa with no contact to the outside world. How did you feel when you were in the villa about what the viewers were thinking?

The first couple of days you’re in there it feels completely weird and surreal, but you get used to it after a few days. It’s a very strange feeling as you go in and then you forget the cameras are there and it feels totally normal.

It must have been a great experience being on a reality TV show. What is the best thing that has come out of being in the show?

Finding myself a girlfriend tops it off for me!  I’ve also made mates for life that I now class as my best friends so I’d say that is the best thing that has come out of it alongside finding Molly. I’m not doing my old 9-5 in scaffolding anymore so it’s really been something that has changed my life and made a positive impact.

Everyone on Love Island seems to have an incredible body! Do you think the choice of contestants is fair or there should more diversity on the show?

I think we’ve seen more diversity across the board in this season which is great. In terms of body shape, we have to remember in many cases they select the contestant’s weeks/months before going into the villa so they may train beforehand and change size wise too. Lots of people hit the gym hard before going on holiday, so if this year’s cast are anything like me I’m sure some of them did the same!

How did you feel when you watched the show back after you came out? Did you have any regrets?

Well it made me cringe watching it back, completely cringe! However, I don’t have any regrets, I loved every minute of it and I’m totally happy with my life now.

If you could go back, what would you do differently?

No I wouldn’t change anything. I would be myself like I was when I went in and enjoy the experience. It was incredible and it’s created so many amazing opportunities for me.

It must have been so strange but incredible coming out of the show into so much fame. Did you have any idea how much it would change your life before you went in?

People have expectations after the show but even before I went on it I said to myself if it doesn’t work out and I don’t do well and I’m back to scaffolding then fine. I went in there with an open mind and of the mindset that if it didn’t work out then I’d go back to my life before. I came out to fame but the circumstances were different as it was online fame, we weren’t able to do PA’s so it was probably different to other Love Island contestants.

How did you adjust from regular everyday life to then becoming famous after the show?

If I look at myself now, I feel like I’m exactly the same person now as I went in as. Some people get completely lost in it, but I am exactly the same and it’s how I want to be. I didn’t want to go in and change who I am as a person. The only thing that’s changed for me is my career and my haircut (Callum laughs). 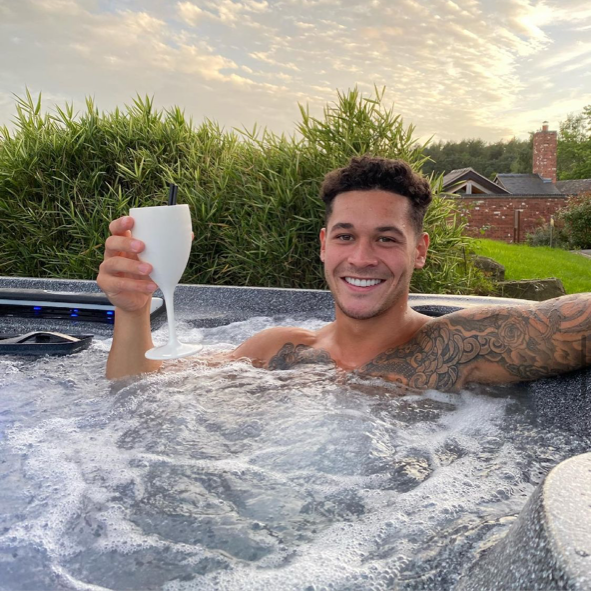 You were perceived as the cheeky chappy of the show? Is that actually true or just how you came across?

It must feel quite unfair on the other half when you have to recouple in the show – how did you feel at that moment? Was it nerve racking?

It is so intense! What you see on the TV is so different as the recoupling process takes about five minutes on TV but is a longer process on the day.The emotions keep building and building, it really is the most nerve-racking part.

It must have been such fun being on the show and being in a villa with the same group every day. What did you enjoy the most?

I just enjoyed being around people every day. I was on a building site for the majority of my life so it was so refreshing meeting new people and talking to different people every day.  There’s no pressure, it’s like you’re on holiday with a group of your mates just having a laugh and having the best time. It’s honestly the best experience. I have made mates for life.

It’s different for different people I think. I personally didn’t find anything challenging or intense about being in the villa but some do. Of course you have the challenges but, apart from that it feels like you’re on holiday with your best mates looking for love. Sometimes your emotions are sky high as you’re in a villa with people and there’s situations between couples but aside from that it just feels like a really fun holiday with some challenges and dating thrown in.

Has Love Island opened opportunities for you to do other things?

Definitely – when you go in there and you do alright on the show you’re always going to get catapulted into work that you’ve never done before – reality TV shows are bound to open new doors and opportunities for you. My life is obviously a lot different to before I went in, I used to work on a building site and I’m now doing red carpet events, PA’s and working with some amazing brands so it’s opened up so many new doors for me.

What are you mainly focussing on now for work? Have you gone back to scaffolding?

I’ve been doing a lot of brand work and keeping my social media on point. It was mad, I went in to the villa with under 1,000 followers! I think I used to post twice a year and I came out to a huge following it was so bizarre but it comes with going into Love Island or a reality TV show. You have to really get used to it, if you don’t keep your social media up to date and engage with your fans and followers you won’t get far. I know people think it’s as simple as just taking a picture and posting it on your social media but it’s much harder than it looks, it’s created careers for people. It’s a full time job in itself!

Would you like to go on another reality TV show again?

What would be your best advice to those going into the show now?

What do you think of the latest season? If you were in the show who would you couple up with?

It’s starting to get more intense now, there’s new people coming in, no one’s really secure. The bits they show on the Saturday, the unseen bits are the bits that no one really sees. They should start putting those bits in as opposed to the normal chats! They should throw in the funny bits every day!

I really wanted Brad to win it but he went out the other day. It’s a tough one, I’m not too sure as they’re all over the place at the minute. I can’t see two right now that are clear winners. Potentially Aaron or Jake and Liberty but let’s see what happens when they go into Casa Amor, he might do what I did so let’s wait and see.

You look so happy with Molly, would you have thought you would have been in this position two years ago?

A lot of people go in to come out with a girlfriend or boyfriend or for the fame of being on Love Island but I genuinely went in there for the experience and came out with an incredible bonus (Molly). I went in with a really open mind thinking it would be great if I met someone but I didn’t go in with the intention of coming out with a girlfriend and obviously it’s worked out. 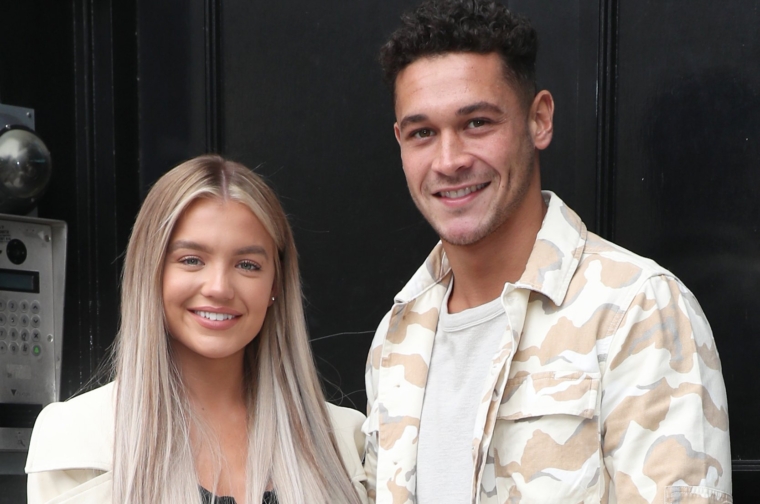 Do you have a favourite in this season’s show?

I like Liberty, she’s really funny, I like Jake and Aaron. Some of them we haven’t seen much of, it’s been couples chatting as opposed to people having a laugh with each other and seeing what their personalities are really like. When you’re in there it’s different, you see what people don’t see on the outside world where the show can only play for one hour each day.

Who do you see as the next Callum and Molly in this season’s show?

(Callum laughs) It’s very hard to say at the minute, as soon as Casa Amor comes I’ll definitely be able to tell who’s going to be the next us.