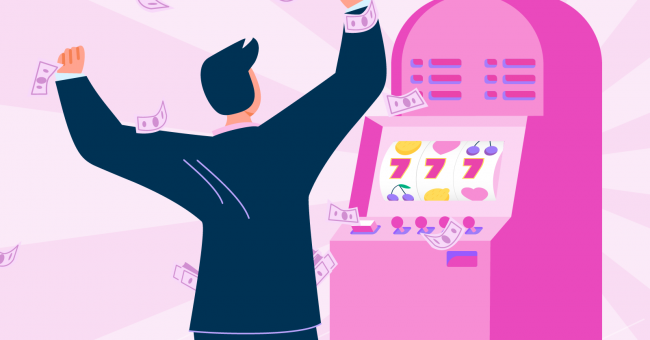 We all dream
of landing a big win when playing slots. However, for some, the dream has
become a reality, as they’ve scooped millions of dollars simply from one spin
of the reels.

As you might expect, the majority of these big winners have hit the jackpot in Las Vegas, the gambling capital of the world, but online slots have provided some mammoth prizes too.

First up, we
come to the 10th largest slot machine win of all time, won by a
player at the Rampart Casino in Las Vegas in December 2013.

They spent just $20 on the Megabucks slot machine (featured on 80% of this list!) before winning a jackpot of $14.3 million.

The winner
decided to remain anonymous and donated much of their prize to charity.

The next entry on our list of the biggest slot machine wins ever is the $17.3 million won by a woman from Las Vegas.

She visited the M Resort in Henderson, where she used some free credits to play the Megabucks machine and won the huge prize.

It just goes
to show that you shouldn’t forget about spending any free credits you might
have!

This online jackpot hit in 2013 and was won by a very lucky British soldier. He won a jackpot worth £13.2 million, which was worth approximately $20.8 million at the time.

The prize was won while playing the Mega Moolah slot at Betway. The player from Crewe, Jon Hayward, spent just 25p before winning the giant sum. Wow!

This is
perhaps the most unbelievable entry on the list.

In 2005, Elmer Sherwin won $21.1 million while playing the Megabucks slot in the Cannery Casino & Hotel.

The amazing thing? He had already won the jackpot on the machine previously, scooping $4.6 million while playing the game in 1989 at the Mirage Hotel & Casino.

We now head to perhaps the most famous casino in the world: Caesars Palace.

This was the location of a ginormous jackpot in 1999 won by a business consultant who wagered just $10 on – you’ve guessed it – the Megabucks slot machine.

The
49-year-old from Illinois, who remained anonymous, won a massive prize of $21.3
million.

The next huge
jackpot on our list was won by a player called Johanna Heundl, who played the
Megabucks machine at the famous Bally’s in May 2002.

Heundl was 74
years old at the time of the win, which she managed to scoop before breakfast. She
only spent $170 before winning the jackpot.

Another
online slots win, this time in 2013 by a Finnish player spinning the reels of
Mega Fortune, the famous progressive slot from NetEnt.

Amazingly,
the lucky Finn only spent 25¢ before they won their colossal prize. The jackpot
of €17.8 million, which was worth approximately $23.6 million in 2013, was won
at PAF.com.

In third
place is a lucky retiree, who went to the Palace Station Casino in 1998.
Intending to spend $100, she ended up spending triple that, but it was a
fantastic investment.

As with the many others this list of the biggest slot machine jackpot wins, she too played the Megabucks machine, and was fortunate enough to win a massive prize of $27.6 million!

In second
place is Cynthia Jay Brennan, who was 37 when she managed to scoop a jackpot
worth just under $35 million in 2000. Once again, this prize was won when
playing on the famous Megabucks slot.

However, this
time it came while Brennan was in the Desert Inn, which used to be in Wynn Las
Vegas.

Tragically, she was seriously injured in a crash which left her paralyzed just months later.

The largest
slot jackpot of all time was won by a lucky player from LA at the Excalibur
Casino in Las Vegas. In 2003, they decided to play the famous Megabucks slot
machine, spending just $100 in their search for a big win.

The win came in the form of a jackpot worth a staggering $39.7 million, which remains the largest jackpot ever in history.

You might have heard that there was a giant $42.9 million win for a woman in New York back in 2016. She was told she’d won the prize while playing the Sphinx slot, even though the game stated its top award was $6,500.

After much
legal wrangling, the case disappeared. However, previous rulings show that this
claim was almost certainly rejected, and the woman didn’t receive the prize.

As you can see, it is possible to make big money while playing slot machines.

Some players believe they can get an edge by searching for the loosest slot machines or reading up on how to win at slots, but it’s important to know that slot machines are totally random and it just depends if Lady Luck is on your side when you play!

For more slots content, check out:
What’s The Deal With Slot Machines And Gas Stations?
12 Sneaky Ways To Cheat At Slots