Poker owes a great deal of its popularity to TV
exposure.

Although the game has been on our screens for a long time, it wasn’t until 1999 – the year the hole card cam was invented – that things started to really take off.

Of course, no single entity has reaped more benefits from the introduction of the hole card cam than the World Series of Poker, whose ratings skyrocketed in the years that followed.

So, the question is: Why is it so important for people to see hole cards? And, more importantly, would they still be interested in WSOP if they couldn’t?

Why was it that poker grew in popularity so much once the hole card camera was introduced to the televised WSOP competition?

It was still the same game, the same players, and the same action.

The only difference was that viewers no longer
had to wait for the showdown to see players’ hands. In the hands that didn’t go
to a showdown, they had the advantage of knowing what players had.

On the surface, it doesn’t look all that important.

But, knowing players’ holdings offers a much better experience as it allows viewers to get involved in the action.

With the full information at their disposal, they
know if a player is bluffing or has a monster, which makes it much more
exciting.

It provides them the opportunity to root for
the result they want to see. If their favorite player is facing a huge bluff,
they can shout at the TV for them to make the call.

If the same player is holding the nuts and has moved all-in, the audience at home can root for their opponent to call and stack off.

Thanks to the hole-card camera, people at home
get to “play” perfect poker.

Having all the information readily available,
they know exactly what to do, and they get mad about players doing the wrong
thing.

That’s why the hole card cam was a game-changer.

You really don’t need to know much about poker to know someone should fold their Pocket Jacks before the flop when you know the other guy has Pocket Aces.

So, having that information, viewers get much
more immersed and involved with the game, as they can easily offer “expert”
advice even to the best of the best.

How could Ivey make that silly call when it was
so obvious the guy had the nuts?

It was far from obvious, of course, but it kind
of seems obvious when you can see the hole cards.

It’s an interesting phenomenon, but it works
wonders for ratings, and professional players aren’t overly concerned about
what random viewers think of their play.

TV Poker Without
Seeing Hole Cards – Does It Work? 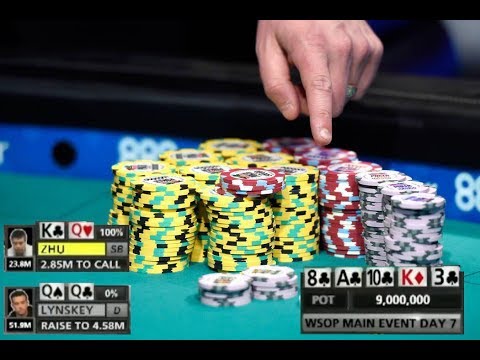 Why did Texas Hold’em become the most popular
form out of all poker variations out there? Is it really the best, the purest,
and the most entertaining poker format?

I guess it is, to some extent, but a big part
of the reason for the game’s popularity is the fact that it’s the easiest
format for TV production.

With just two cards in the hole, it was easy to put them on the screen and get the audience to follow along.

Trying to do something like this with a game like Seven Card Stud would be a real nightmare, especially for early-day hole card cams.

The game started to become really popular when
WSOP made it possible to see players’ hole cards, allowing viewers to go behind
the scenes and see how poker players think.

Poker was on TV long before these cams, but it
wasn’t very popular. Save for hardcore fans of the game, not many people were
interested in watching the game on TV.

Without the benefit of seeing hole cards, they
had no real idea what was going on.

So, if we go back in time and look at the
information we have, I would say that WSOP wouldn’t be nearly as popular
without showing players’ hole cards.

It’s one thing to watch a player sweat over a difficult decision when you know what they’re up against.

If you have no idea about whether the other player is bluffing or not, though, it’s just not nearly as involving.

The profile of an average poker show viewer has changed quite a bit. Most people who watch WSOP today know at least something about poker.

Texas Hold’em has become a global phenomenon, and it’s no longer some obscure game that people are getting used to.

Even without hole cards, the final tables of big WSOP tournaments would still bring in decent viewer numbers. In fact, this approach has been tested with live coverage of some events, and there was plenty of interest.

Hardcore poker fans will watch the game in any
format as long as there is a good lineup, but the number of hardcore fans is
probably not big enough to make up the production costs.

What Happens If WSOP Can No Longer Show Players’ Hole Cards?

If there is one thing that we can be certain
of, that’s the uncertainty of gambling laws – especially in the United States.

New laws and regulations are passed quite
frequently, especially on a state level, often impacting the gaming industry.

It’s not completely impossible that at some
point, for whatever reason, showing players’ hole cards on TV could be banned.

You could argue that it doesn’t make sense, but
there are many things in various gambling laws that don’t make much sense.

If we take this hypothetical scenario, in which
Nevada prohibits showing hole cards, how could this impact the World Series of
Poker?

From my point of view, it would be a huge blow.

WSOP has already had to deal with rating drops after online poker was banned in the United States, and people lost interest in the game.

But if they had to somehow produce interesting
content without the ability to show hole cards during hands, I think that would
be too big of an ask.

On one side, there is the fact that people know
much more about poker and can, to some degree, enjoy the content without this
information.

On the other, however, you have an average
viewer who’s looking for exciting and engaging content that captures their
attention. I don’t think that poker without the hole cards’ information can
meet those expectations.

Without showing hole cards, WSOP would be
asking the audience to constantly think about hands and follow the action
closely if they want to enjoy the show.

I feel that’s just too much to ask from someone
who’s just looking for a bit of entertainment.

Even as someone who truly loves watching and
playing the game, I think that WSOP tournaments (or any other televised poker
events, for that matter) wouldn’t be enjoyable to watch without showing hole
cards.

It could be fun for a little while, but
watching an hour or two of tournament action without any hole card information
sounds boring. Perhaps not everyone shares this point of view, but I believe
that it would hurt interest in poker quite a bit.

The poker industry owes a great deal to the
hole card cam inventor, as it’s hard to imagine the game without it.

And, hopefully, we’ll never have to find out what
it would be like to watch WSOP without hole cards showing.