Poker card
protectors have become very popular over the years and are used by many players
as a trademark item.

One famous example would be WSOP champion Greg “Fossilman” Raymer, who used to bring fossils from his personal collection to use as a card protector. 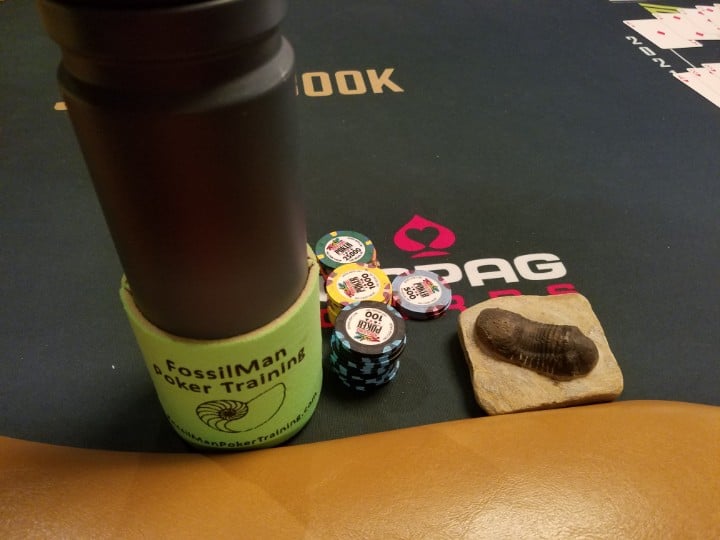 So if you’re looking to get more involved in the live poker scene, you might want to get one for yourself.

Whether you’re looking to grow your personal brand and make a statement or just want one for practical purposes, I’ve got some ideas that could help you decide what to use.

Let’s talk
about poker card protectors, why they’re used, and how they can help – or hinder!
– you at the poker tables.

What Are Card Protectors?

A card
protector is any item you bring to the table to protect your hole cards during
hands.

In the most
basic sense, a card protector can be used to protect your hand from getting
accidentally folded, which can sometimes happen in live poker if your hand or
an object is not on top of the cards.

To avoid
constantly keeping their hand close to their cards, some players choose to use
a card protector, or simply use one of their chips.

However, these items have other purposes than simply protecting the cards.

In fact, they are more often used as talismans and lucky charms than anything else.

Poker
players are a fairly superstitious group of people on average, with many
recreational players believing luck has more to do with poker than skill, which
is why any favor from the poker gods is a welcome sight.

In reality, a poker card protector usually won’t help you that much – but it won’t hurt you too much either and are often a great talking point.

Not everyone agrees, though. Poker champion and coach Jonathan Little believes there is a strong argument for not using them at all – but more on that late).

For now,
let’s look at some ideas to inspire you.

The most
common card protector out there is poker chips. Many players don’t bring a
particular card protector but rather use the chips they’re playing with to
protect their hands.

Using a
single chip of the lowest possible denomination is pretty common, although
players use other denominations and even groups of chips to protect their
cards.

A word of
warning: If you’re going to use poker chips as your card protector, make sure
you always use the same chip denomination and use the same number of chips to
guard your cards.

The reasons
are quite obvious, as you don’t want to give away the value of your hand and advertise
that you have a premium hand or a medium holding in different situations.

Alternatively,
some players use poker chips from other venues or a particular poker chip as
their card protector throughout their careers.

Most
casinos and poker rooms won’t mind if you bring in a chip that has nothing to
do with their chips and use it as a card protector at the tables.

As we saw
with the example of Greg Raymer, some players like to use their own lucky
charms at the tables that are totally unrelated to poker.

He used
fossils, but I have seen other players use things like little rocks, toys, and
other items of sentimental value that they believe bring them good luck.

Religious
items are not off the table either, as some players believe religion and poker
mix well, and who’s to say they don’t?

Whether you
got your good luck charm from your wife, your priest, or your shaman, you can
use pretty much any small item that you believe is lucky as your card
protector.

Items like
coins, small jewelry, and other small items that won’t cover up your cards are
fair game and won’t be banned in any cardroom.

There’ll only start being problems at the casino when you start bringing bigger items that completely cover your cards or could be used to interfere with the game in any way.

Little
animal figurines are another popular choice for card protectors.

Some
players just think they’re cute, while others have a more superstitious view of
things and want to channel energy through their spirit animal.

Either way,
pay attention the next time you are at a big poker tournament, and you’ll see
that there is no shortage of pandas, dragons, and dinosaurs on top of players’
cards.

Once again,
the only thing you should be concerned about is the item not being too big, as
you won’t be allowed to use a card protector that covers and hides your hole
cards.

Like
animals, various cartoon character figurines can be used as card protectors,
sometimes having a purpose beyond superstition.

If you can
find one that’s funny or silly enough, you may start to get some notoriety in
the playing field, which is always a good thing.

If you get
labeled “The South Park Guy” players will want to play hands with you
and, in most cases, will play them less optimally than they would if you were
an anonymous player.

Things like
props and card protectors can definitely have a purpose in the live poker
setting, and you can supplement your poker skills with a little bit of fame and
hustle.

After all, players like Phil Hellmuth and others who’ve built their brand on their behavior get all sorts of unsolicited action, so why shouldn’t you try to do the same? 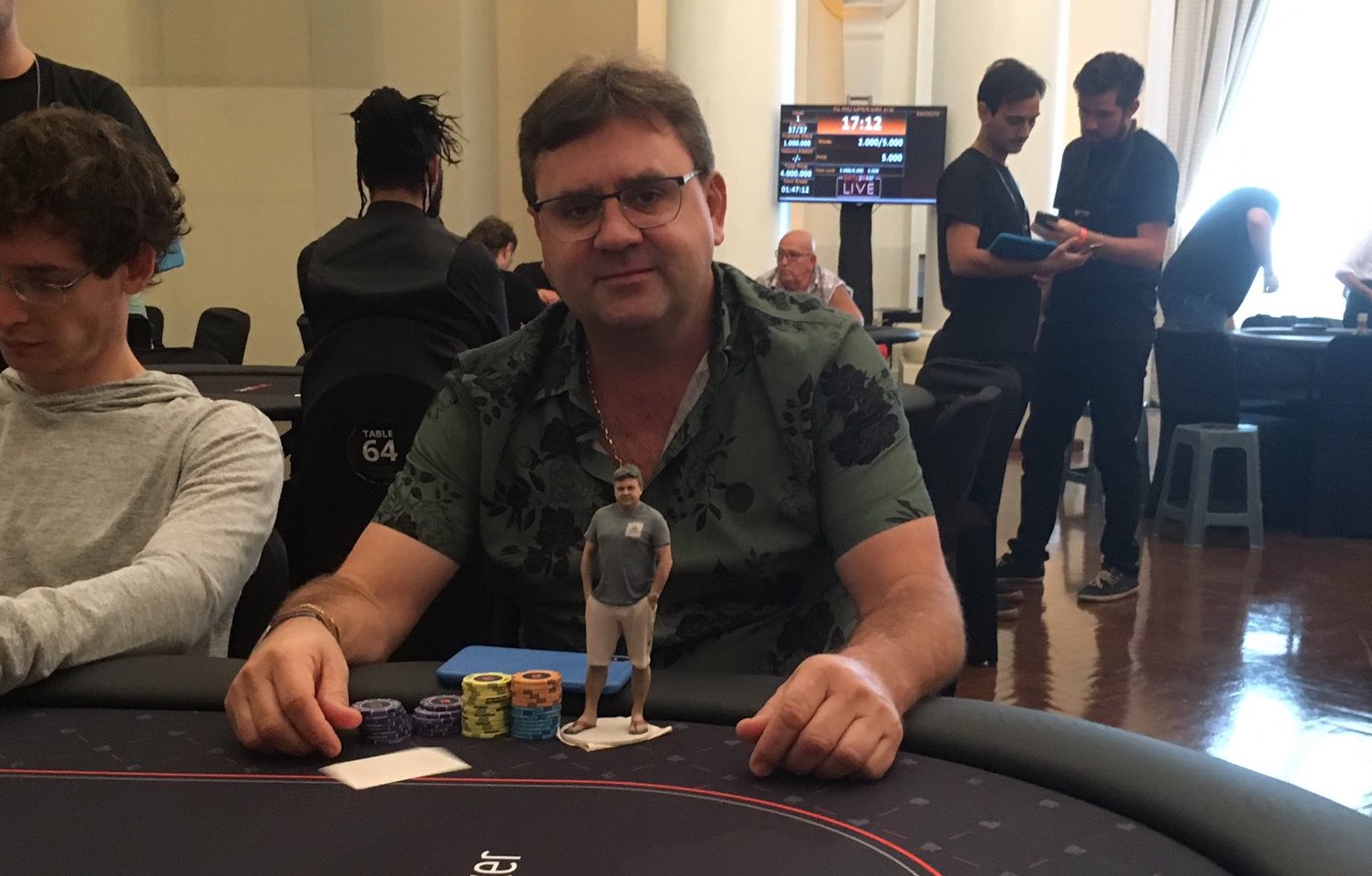 You could be like this guy, who brought a mini version of himself as his card protector – and got a lot of kudos for it. [Image: Twitter/PaulOresteen]

Moving on
to metal chips, an item that’s been specifically made for the purpose of
protecting cards.

Card
protectors have become so popular that companies have started to manufacture
items with this particular goal in mind.

If you look through Amazon, eBay or Etsy, you’ll see a variety of silver and golden-colored card protectors with various designs.

They’re usually slightly bigger than your average poker chip and quite heavy in hand, making them ideal for keeping your cards safe from getting folded. 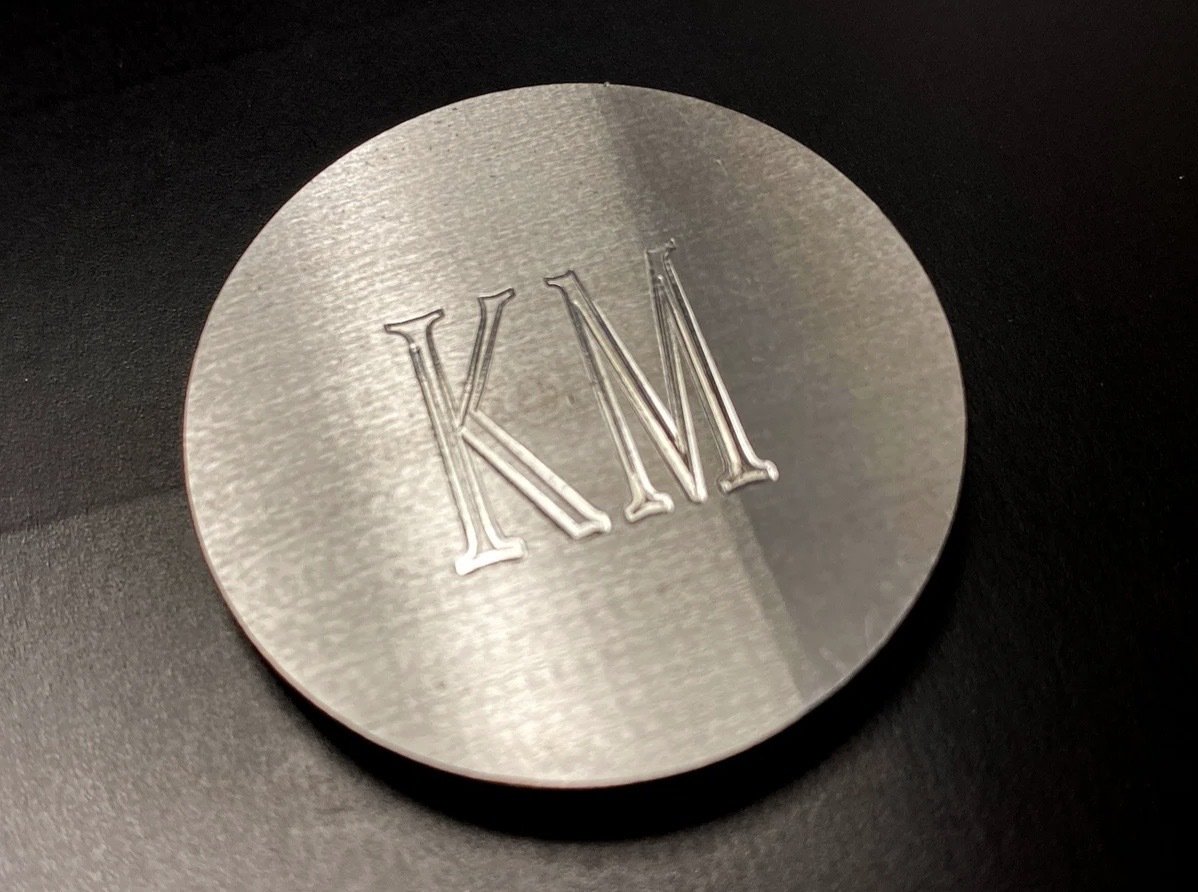 Why not personalize it? [Image: Etsy/HardCheeseMetals]

The reason
is that LEGO offers so many different sets, allowing fans of any franchise out
there to get a figure that represents their favorite fictional world.

Whether you
enjoy Star Wars, Game of Thrones, or Harry Potter, you can
easily purchase a LEGO set with your favorite characters in it and show your
fellow players what you’re into.

We’ve
already covered personal lucky charms, but if you don’t have one then there are
a number of things that are widely considered across different cultures to be lucky.

It’s no
wonder, then, that you’ll see quite a few four-leaf clovers, horseshoes, or
joker faces being used as card protectors at the poker tables.

Having a
horseshoe on top of your cards might seem like a Wild West cliché but the game
you’re playing is Texas Hold’em, after all, so why not!

An Argument Against Card Protectors

So as mentioned
at the start of this article, there is an argument against using card
protectors altogether.

Jonathan
Little is one of the best poker coaches out there and he strongly advises
players not to use them.

His
reasoning is that using a card protector adds another physical element to the
game of poker, which can be used to exploit you and get information about your
hand.

He even
shared an example of this, where he noticed a player on a final table who was
commenting on using a different way of protecting his cards when he had premium
hands and when he had medium-strength holdings.

This should
obviously be avoided at all costs.

However,
even if you’re not so transparent with it, you could still be giving things
away with your card protector.

For instance,
many poker players look at their cards before it is their turn to act. If they
have a hand they want to play with, they will place their card protector on top
of the cards.

This alone
is enough to tell players in earlier positions that you have a decent hand,
which can prompt them to make plays that directly exploit that fact, such as
fold hands they wanted to play or trap you with monsters.

While I’m
not sure that card protectors should be completely eliminated from the game,
Little definitely makes a strong argument.

If his
argument isn’t enough to put you off, hopefully this article has given you some
good ideas on what items you can use and where to get started.