It seems that western countries are accelerating
towards cashless societies where every payment or transaction might be monitored
or tracked by entirely benign and friendly government overseers.

But in the gambling world, cash remains a powerful tool for managing one’s bankroll, tipping staff, or sharing profits away from prying eyes.

Sure, crypto offers some financial anonymity
while also being in the sights of authoritarian regimes that would prefer some
control over whatever monetary tools are used within and without their borders.

But for most offline transactions, cash is still
king and there are countless scams to be wary of in your travels.

I Need A Guy Who Knows A Guy

Exchange rate cons are so common that anyone who
travels regularly will know where to find them, which is often at a
“legitimate” bureau de change in airports or tourist hotspots.

In Paris, these money changers are everywhere
and appear to compete with each other while their rates or fees make all of it
a wash in terms of being a sh*tty deal no matter where you go.

During a profitable visit many years ago, I
found myself with a lot of cash that would need to be changed before returning home,
but I quickly balked at the exchange rates and fees being offered around the
city.

Luckily, my friend and host was also a frequent
traveller and drove me to a little office down a back alley and up some stairs
near a side street in an obscure part of the city.

I couldn’t find that office again for love nor
money but on that day, I saved a large chunk of change for the price of lunch
and a few card tricks between friends.

Ever since, I’ve always asked local contacts
where the “place” is to change money and am often lucky to find someone with a
guy who knows a guy who knows another guy.

In Macau, we changed our cash at the cage in
several casinos; in Tokyo, a local friend navigated Japanese rules and
paperwork to get me the best deal while in Ho Chi Minh City.

A friend visited a little apartment where his
cash was whisked away for 10 worrying minutes until an old lady returned with
fresh dollar bills that his local contact carefully checked before completing
the transaction.

The risk in each of these situations is that you
could easily be entering into a scam where you can be robbed or ripped off with
counterfeit cash so in each of these cases, I (or my friends) relied on a
trusted local contact who knew “the lay of the land” in terms of fraud and
deception.

I’m not saying that theft doesn’t happen in
Tokyo but there are clear signs whether a business or a procedure is legitimate
and in Paris, my friend was too important a guy and too smart to be taken in by
(or to facilitate) this type of con game, so I had confidence in that scenario.

In Macau, the casinos change money easily and
regularly so long as the cash (and the person carrying it) isn’t criminal and
they offer better rates than one would find at home, presumably to keep some of
that cash on their tables.

But an apartment in Vietnam with strangers taking
the money away before they exchange it?

Cash can be dangerous for all sorts of reasons,
so when moving it around and changing currency we all need to be careful that a
familiar method in one location doesn’t expose you to scams in another.

So sure, my friends and I tend to ask trusted
local contacts where to find better deals but if there’s any doubt – any at all
– I’d rather line up behind the tourists to get robbed by a clerk with a
calculator. 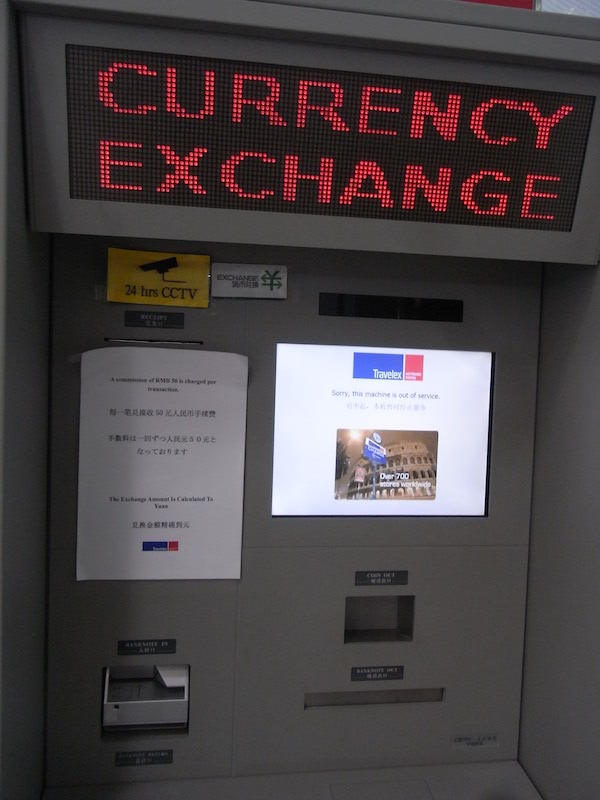 Across Europe and in many parts of the world,
fake exchange offices attract transient victims to lose money either through
bad arithmetic, counterfeit cash, or outright theft.

In many cities an office isn’t even necessary.

In Prague, for example, bogus money traders prey
on tourists near legitimate (though ridiculously expensive) currency exchanges
and approach people claiming to be from an exchange with preferable rates.

The scam is simple since it’s easy to spot
someone checking posted exchange rates, highlighting that they must be carrying
cash and are therefore worth scamming!

So once a likely target is spotted, the hustler
knows they are ripe (worth taking) but also what they want and are
actively searching for at that exact moment in time.

Knowing what someone wants is the con artist’s
most powerful advantage and in this scenario it can be all too easy to leverage
this information into a quick and easy deception.

All the scammer needs to do is cut into the
tourist before they approach the exchange desk and give them a story with
promises of a better rate and no fees.

Needless
to say, many people are quick to jump at that “opportunity”.

The twist (in Prague) is that these counterfeit currency converters do not trade people’s cash for Czech Crowns but for expired Belarusian Rubles that appear similar to foreign eyes and are (of course) completely worthless.

Around the city, you can see signs warning
people not to exchange money on the street.

But human beings are often victims of their own
impulses, which scammers know how to trigger using centuries-old psychological
tricks that never fail to manipulate people in the heat of the moment.

And it’s not just exchange offices where these
scammers prey upon the unwary.

At ATMs, clever con artists wait for travellers
to withdraw cash, spotting anyone who receives large denomination notes, such
as 2,000 CZK, then offers to break their bill in exchange for four 500 CZK
notes that are actually – you guessed it – expired Belarusian bills.

As with many con games, being unfamiliar with a
city or country means you might be easy prey for this kind of “fish out of
water” con so care must be taken in any cash transaction on foreign soil but
also at home.

In the UK, I was once approached in the waiting
area of a bank with a proposition to swap cash since I had dollars and they had
pounds; the logic being that the bank would only take a chunk of our money when
we could both save by exchanging directly.

My “swindler sense” told me immediately this was
too well practiced a pitch to be trusted so I turned down her “kind” offer and
sure enough, before reaching the counter she left the bank to find another
sucker.

How common this is inside banks I can’t say but while financial institutions can cost more in terms of fees or less attractive rates, going off-reservation requires a lot of trust and an unknown degree of risk.