The World Series
of Poker is best known for its bracelets since winning one of these golden
trinkets is a dream of many poker players, amateurs and professionals alike.

That said, there
is another competition for the top pros every year at the WSOP that the general
population doesn’t know too much about.

Of course, I’m
talking about the Player of the Year race.

If you’ve been a
World Series fan, you probably know about the POY race, as it’s often mentioned
during tournament broadcasts and players themselves frequently reference it in
their tweets, blog posts and vlogs.

The Player of
the Year race is supposed to determine the best or the most successful player
of the entire series.

Every tournament
on the WSOP schedule is a part of the race, and players can earn points for the
POY leaderboard.

At the end, the
player with the highest number of points wins the prestigious title, alongside
the cash prize, which was $15,000 for the 2021 series.

That honor went
to Josh Arieh, but it was a really close race all the way to the end.

Over the years,
there has been a lot of discussion on how the POY system could be improved,
with some prominent figures from the poker world frequently pointing out both
flaws and advantages of the current setup.

In this article,
I’ll explain everything you need to know about the WSOP Player of the Year
points system as it is now and will also look back at some of the criticism it
has received over the years.

WSOP Player of the Year Leaderboard – The Basics

In the simplest
of terms, the WSOP Player of the Year race should produce the best, most
successful player of that year’s series. 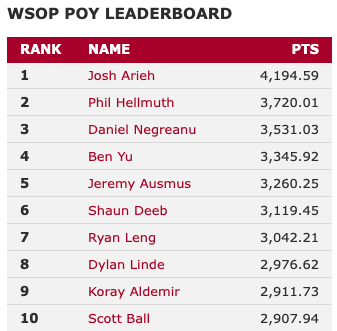 To achieve this, the organizers have put a certain points system in place. It has its flaws but with so many moving parts, it’s hard to come up with a perfect solution.

In fact, after
some heavy criticism during previous years, WSOP decided to change things
around for the 2018 series.

They implemented
big changes to the old scoring system and replaced it with a fairly successful
one they’ve been using for the WSOP Circuit for several years.

The biggest
change saw a significant increase in points awarded for bracelet winners while
reducing the number of points for min cashes.

While WSOP still
wanted to reward consistency, the overall feeling was that the discrepancy
between making money and winning an event wasn’t big enough.

Of course, new
rules created new problems and led to new criticism, but more on that a bit
later.

First, let’s dig
into the actual ranking system to see how it works. If you were following the
2021 series and weren’t sure where the movements on the POY leaderboard were
coming from and why players were awarded a certain number of points, this
explanation should help.

One interesting
thing about the whole Player of the Year race is that the WSOP doesn’t actually
have a spreadsheet for players to refer to.

That said, every
event has its own calculator, which can tell you an approximate number of
points you can expect for different finishing positions.

As the
organizers explain, the formula is loosely based on the WSOP Circuit POY system
and scaled appropriately to accommodate for much larger fields in the World Series
tournaments.

For WSOPC
events, points are awarded as follows:

All players
making the money get at least 2.5 points, and that number increases as they get
deeper into an event and other players are eliminated.

For the actual
World Series of Poker, these numbers are super-sized, but the organizer has
tried to keep a similar ratio, allowing players to have at least a decent idea
of the number of points they can expect from any individual event.

It’s important
to note that almost all bracelet events count towards the Player of the Year
race, with some notable exceptions.

All non-open
events – i.e. events that aren’t readily available to the entire playing field
– are excluded:

This makes
sense, as counting these would give an unfair advantage to those players who can
participate, so there’s never been any particular complaints about this aspect.

Since there is no spreadsheet or rulebook that players can refer to, the only way to gauge how many points one can expect from an event is by looking at the past results or using the POY calculator available on the site.

The calculator
lets you pick an event and add the number of entries, which is very significant
in determining the total number of points to be distributed.

Another
important factor is the buy-in amount, as higher buy-in events have much bigger
point pools, which clearly puts players with big bankrolls at an advantage.

For example, a
win in a Super High Roller event with just 80 players would net more points for
the winner than winning the $500 Reunion event with 20,000 entries.

The difference
between the first and the second place is very significant as well.

A tournament winner
receives double the number of points of the runner-up. This means that actual
bracelets are hugely significant for the final standings.

Going down the
scoreboard, the differences between all other positions are much smaller.

Of course, the
runner-up will get more points than the 9th place finisher, but the
difference between finishing second and third is almost insignificant from the
POY point of view.

So, the current
system is heavily focused on the winners and provides a big advantage for
players participating in high roller and super high roller events.

These
tournaments, while tough, usually feature very small fields, so players keen on
winning the POY title need to get in the mix.

Remember how I
mentioned that WSOP changed things around and instituted a new system that gave
winners bigger rewards?

Well, it turns
out this system isn’t perfect either, as it doesn’t reward consistency enough.

We’ve seen a
perfect example of this at the 2021 World Series of Poker, where legendary Phil
Hellmuth put up perhaps his best performance in all the years we’ve watched him
play the series.

Whether you’re a
“Poker Brat” fan or not, this was truly amazing to watch, and it seemed like he
was poised to run away with the Player of the Year title, one of the rare
accolades still missing from his poker résumé.

In the end,
though, he was denied by Josh Arieh, who also had a great series and is a great
player in his own right. 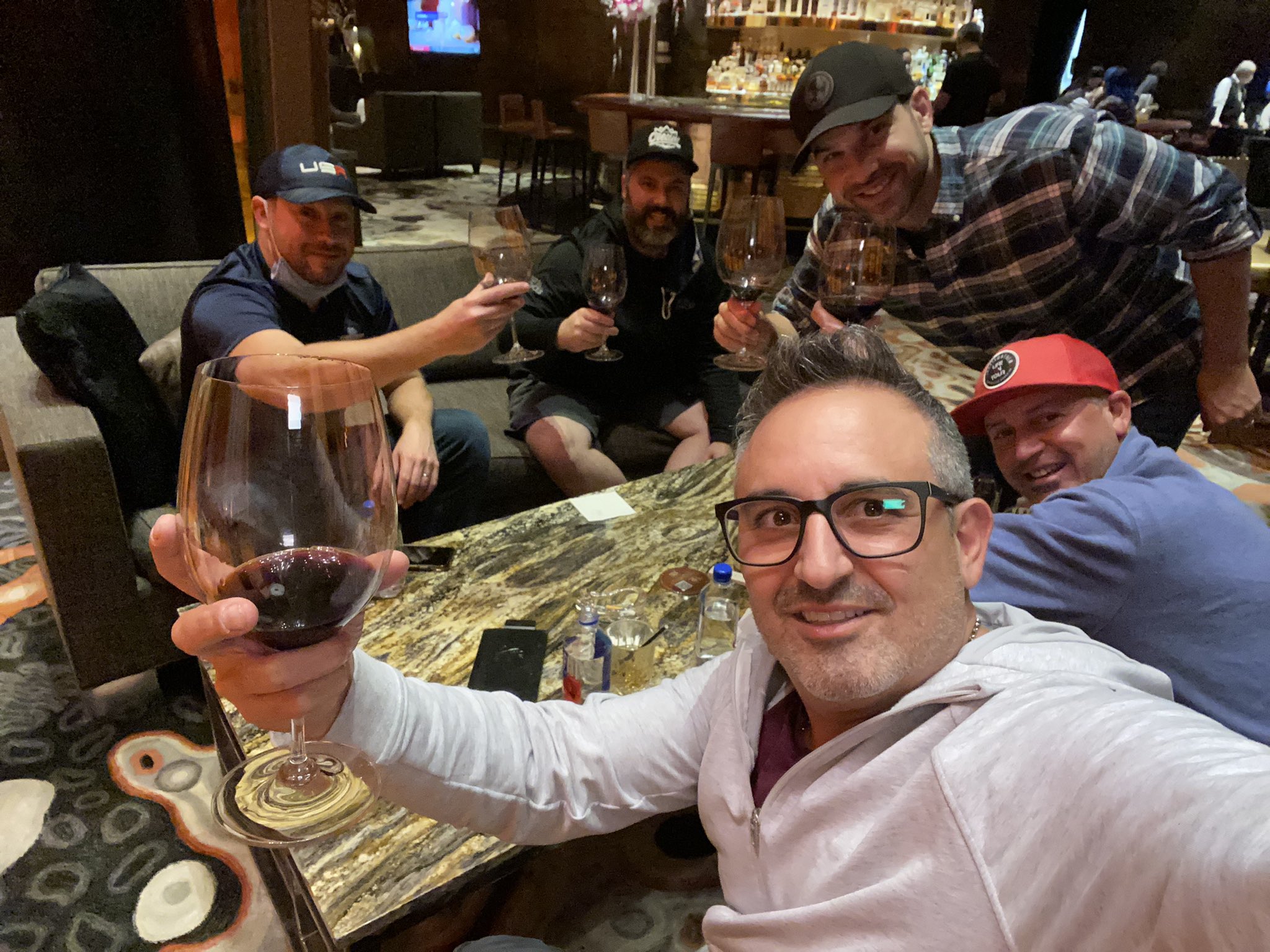 But what made the biggest difference was that Arieh was able to ship two bracelets in 2021 against Hellmuth’s one victory.

If Hellmuth
could have converted either of his two runner-up finishes into a win, it would
probably be a different story.

To his credit, he
was a gentleman about it and didn’t try to come up with reasons why he should
have won. The rules are as they are, and no matter how you look at it, Arieh is
a deserving winner.

However, this
begs the question of whether the current POY system needs some changes?

A Problem With No Perfect Solution

Over the years,
WSOP has tried changing and tweaking things several times. After all, they
don’t have a particular interest in rewarding the POY title to any specific
player.

In fact, if
anything, they’d probably be better served if it went to someone as famous as
Hellmuth as it’s basically free advertising.

So, on their
part, the organizers would probably love to have the perfect system in place
where the best, most deserving of all players out there takes home the
accolade.

The problem is
there is no such system – as shown by the 2021 series.

Both Hellmuth
and Arieh put in a great performance and are both excellent players, but there
can only be one winner.

The biggest
issue that’s been discussed repeatedly is that of consistency over singular
results, and finding the right balance is simply hard.

On the one hand,
it seems natural to reward someone who strings a series of great results
throughout all tournaments.

On the other, if
someone wins two or three tournaments, even if their other results aren’t
great, those wins need to be appropriately rewarded.

After all, in
tournament poker, it’s always the winner who takes home the lion’s share of the
prize pool, so why should the Player of the Year race be any different?

So, while there
is some room to make the system better in this regard, I’d say the current one
is pretty fair, even if not perfect.

Another, perhaps
bigger issue, is that of buy-ins.

Is it really
fair to have huge buy-in tournaments feature so many points despite small
fields? Even if playing against some of the best, you’re much more likely to
win in a 50 or 100-player event than you are in a 5,000+ field.

In a way, you
could see this as favoritism towards big players as you won’t see an average
Joe or even a solid mid-stakes grinder pony up $100K to play in one of these.

I guess opinions
on this particular topic differ, but I don’t see a huge problem with it.

The WSOP Player
of the Year title isn’t something that should go to just anybody.

The money that
comes with it is relatively small, especially given the kind of results you
have to post to win, so it’s primarily about prestige.

While there is
no reason for poker to be exclusive, I’d say that we can allow for an exception
in this particular category.

If the likes of
Negreanu, Hellmuth, and others from that group are favorites to win every year,
so be it. They’re the kind of names you think of when someone mentions the
Player of the Year, anyway.

WSOP 2021 Player of the Year Summary

Hopefully, this
article has given you some useful insights into how the WSOP Player of the Year
points system works.

It’s one of
those topics that aren’t super easy to explain, mainly because there are no
clear explanations from those who came up with the system in the first place.

But, at least
now you have an idea of how things work and what factors are important, namely:

Size of the fieldThe buy-in amountThe finishing position, with
the winner getting the lion’s share of the points pool

To wrap this
article up, I should mention that the Player of the Year race isn’t always
concluded in Las Vegas.

In earlier years, players could also collect points from WSOP Europe tournaments, which were added to their final tally.

For 2021, WSOP decided not to do this and only count points from the US leg, probably in part due to COVID-19 concerns, but WSOP Europe results will likely be included for future events.